The sun’s rays can be used to produce two types of energy: solar thermal, which converts the sun directly into heat and solar photovoltaic, which converts radiations directly into electricity. In both cases, the energy produced is in function of the sunshine’s level, which can vary, according to the place and the seasons. Solar energy represents a reliable, stable and predictable energy who is also clean.

Photovoltaic solar panels are composed of multiple photovoltaic cells that transform sunlight’s radiation into electricity. A photovoltaic installation efficiency depends on the component’s quality and their arrangements, but also on several external elements such as atmospheric conditions and the reflective capacity of the surrounding soil.

As mentioned before, solar thermal produces heat. There are several ways to capture heat, depending on the use you want to make. For example, solar walls are used to preheat the outside air and allow significant savings during the heating period. Solar thermal panels, for their part, can be used to warmth a heat transfer fluid and reach temperatures up to 70 °C. The energy produced can be used for water or air heating, using an exchanger. It is even possible to store the energy in a tank for a later use, when the sun is absent.

Whether you want to reduce your energy bill while diminishing your environmental footprint,  C-nergie can guide you towards the best choice in your situation. We will also make you benefit from the financial support available. 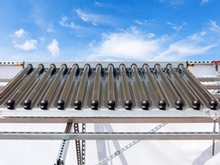