Steam is a heat transfer fluid that is widely used in industry because of its great advantages. Indeed, it can carry a greater amount of heat than a network of hot water, superheated water or event thermal oil. It, therefore, allows the use of smaller diameter pipes and does not require any or very few circulation pumps.

However, steam is expensive; about 30$/ton, considering the energy cost and the water treatment. On that account, it is important to maximize the return of condensates. In the network, the steam gives ways to different consumption stations such as heat exchangers or double-jacketed tanks in which it condenses. At this point, the steam becomes condensate and returns to the boiler room. Another use of steam in the networks is the steam’s direct injection where the total heat is passed to the product for cooking, drying or heating.

Some findings make it easy to assess whether there is potential for the steam network’s optimization.  Indeed, it is often possible to observe a plume on the roof of the establishments. It is usually produced by steam when the condensate passes through a trap, going from a high to a low pressure, causing a “flash” or the return of a certain amount of condensate vapor.

C-nergie has an experienced team and specialized partners who will allow an optimal use of your steam network. 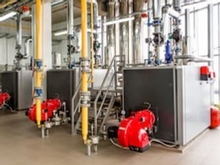