Return on investment period of 3.9 years

Group Legerlite has replaced its production unit; the molding machine and the pre-expandor and wanted to reduce its energy bill. The molding process was releasing a significant amount of heat so C-nergie decided to install a heat recovery system on the water basin of the molding machine.

The recovered energy is now used to pre- heat pre-expender air, make up water for steam boilers and primarily heat the air in a new 30,000 CFM ventilation unit.

-Return on investment period of 3.9 years;

-307 tons of GHGs/year; The average annual consumption of 77 passenger vehicles; 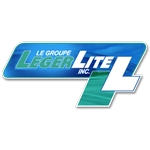 "Founded in 1961, Groupe Legerlite is the pioneer in the polystyrene foam industry. For more than 40 years, the company has been using sophisticated process technologies to manufacture high-quality products. This is why, over the years, Groupe Legerlite has become a past master in its service to a growing clientele. The company enjoys a highly enviable reputation throughout the polystyrene market. Groupe Legerlite serves territories in Québec and Ontario, the maritimes provinces and in several U.S. cities. It also has a subsidiary in Ontario: Foam Concept 2000. Groupe Legerlite's team mission is to offer high quality services and products, tailored to the needs of its customers."